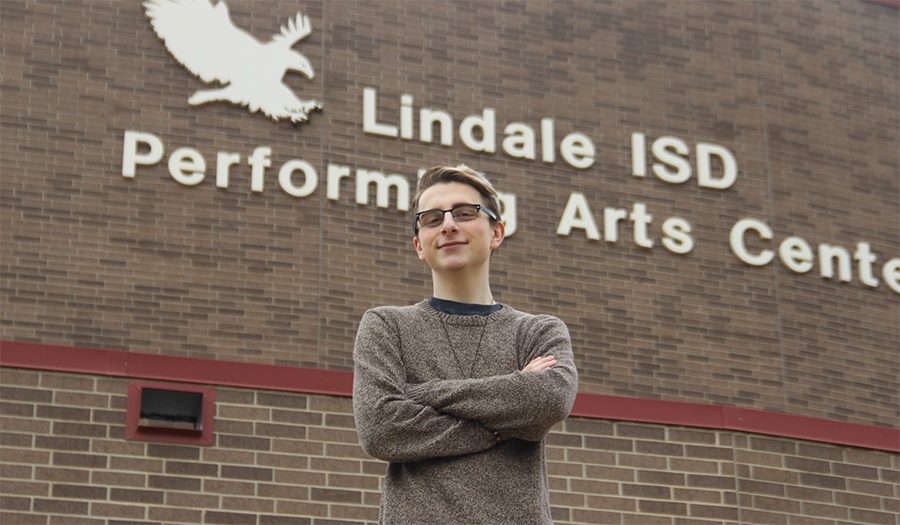 Senior Evan Bewersdorf poses outside the Performing Arts Center. Bewersdorf proposed that the building be named after a former Lindale educator.

Senior Evan Bewersdorf presented an informal proposal to the school board recently to rename the Performing Arts Center after former teacher Janice Caldwell.

“Mrs. Caldwell is such a wonderful person and so respected throughout Texas for her excellence as a teacher and debate coach,” Superintendent Stan Surratt said. “She is certainly worthy of the consideration.”

After hearing from a few current Lindale educators that the creation of the PAC was related to Caldwell’s perseverance in her vision for the arts, Bewersdorf was inspired. The idea to rename the PAC was a sudden thought that struck Bewersdorf while at TFA state competition this year.

“The end goal is to have a legacy for Mrs. Caldwell as a person but also as an educator,” Bewersdorf said. “Her track record at Lindale really shows that she has a passion for the arts. She’s deserving of her name being associated with the building that is centered around performing arts.”

Bewersdorf first brought his suggestion before his teachers, and from there, he was instructed to contact Surratt. After emailing the superintendent, Bewersdorf was invited to propose his concept to the school board at their next meeting.

“When Evan approached me with the idea of naming the Performing Arts Center after Mrs. Caldwell, it warmed my heart to know a current student would come up with such a thoughtful idea,” debate teacher J.P. Fugler said. “I would love for future generations to continue hearing her name in association with the Lindale fine arts program. There is truly no tribute more fitting.”

Bewersdorf is now awaiting the response of the board. Whether or not his proposal is approved, Bewersdorf plans to honor Caldwell in whatever way he can manage.

“I would say that she definitely brought back the passion and interest in speech and debate, and just the arts in a sense, to East Texas,” Bewersdorf said. “Her legacy will live on that way, but I believe that it is deserving to live on for having her name associated with the PAC.”