Not An Ordinary Birthday 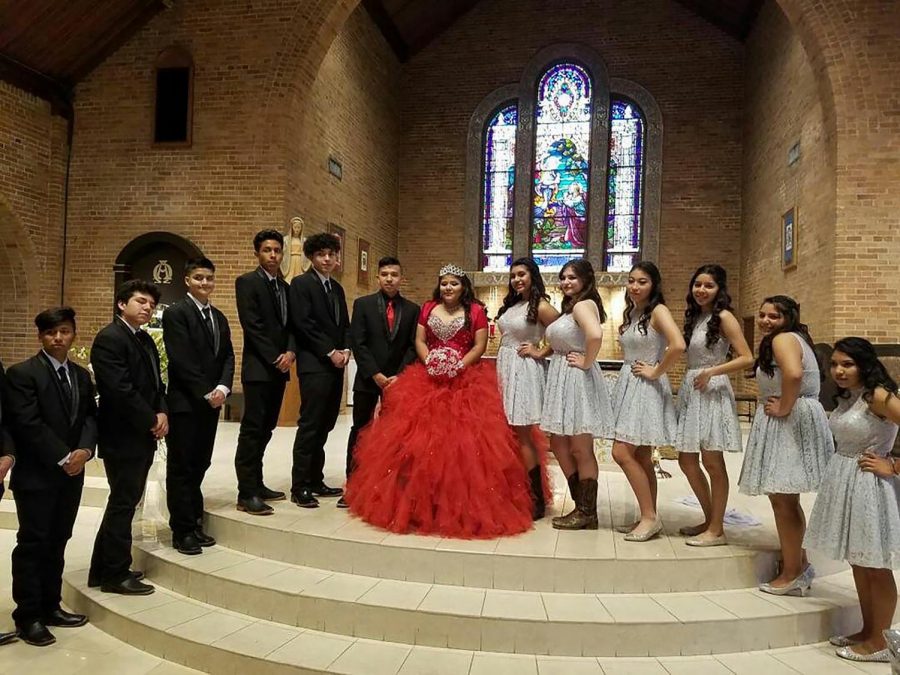 The worn, wooden church doors open.  Gasps of admiration sweep across the crowd of people. The diamond tiara sparkles underneath the lights as she walks down the aisle to the dance floor.  Her dress moves beautifully as she dances with her court. This is a monumental event for many Hispanic girls on their 15th birthday, called a quinceañera.

The quinceañera is a religious ceremony that is an important custom in the Hispanic culture. It symbolizes a coming-of-age time, and is meant to be joyous.

“My favorite part [of her own quinceañera] was when everyone was up and dancing,” sophomore Alessandra Hernandez said. “It was a lot of fun. We practiced for about 4 months, every week. It was a bunch of practicing and saving up.”

It is traditional for the Quinceañera to choose a group of friends to take part in her Honor Court. This can be comprised of her close friends, siblings and cousins.

“The people I chose were either my best friends or family I am close to and that I trust ,” freshmen Anais Campos said. “And [I knew] if I asked them they would do it [for me].”

“My dress [from her quinceañera] was my favorite color from when I was little,” senior Naomi Estrada said. “The fluffiness [of the dress] made me feel royal.”

A tradition in the quinceañera is the changing of the shoe. It is a custom in which the father or male relative changes la quinceañera’s flat shoe to a high heel. This symbolizes the transition from a girl to a woman.

“When you are a little girl you wear more simple shoes,” Estrada said. “When you are older you tend to wear more high heels, more feminine shoes that embrace you.”

Dancing plays a major role in a quinceañera. There are many dances planned out with her court that takes months of planning. It is a tradition for the la Quinceañera to dance with her dad.

“One of the more modern traditions is having a surprise dance,” Hernandez said.  “Usually [the dances] are waltzes, and the surprise dances can be any other genre of dancing.”

Quinceañeras date back years in the Hispanic culture. It is an important part of their heritage and is a celebration of a new beginning for young women.

“It’s a big party with dancing,” freshman Anais Campos said. “[I am excited] for the dancing and spending time with my family.”