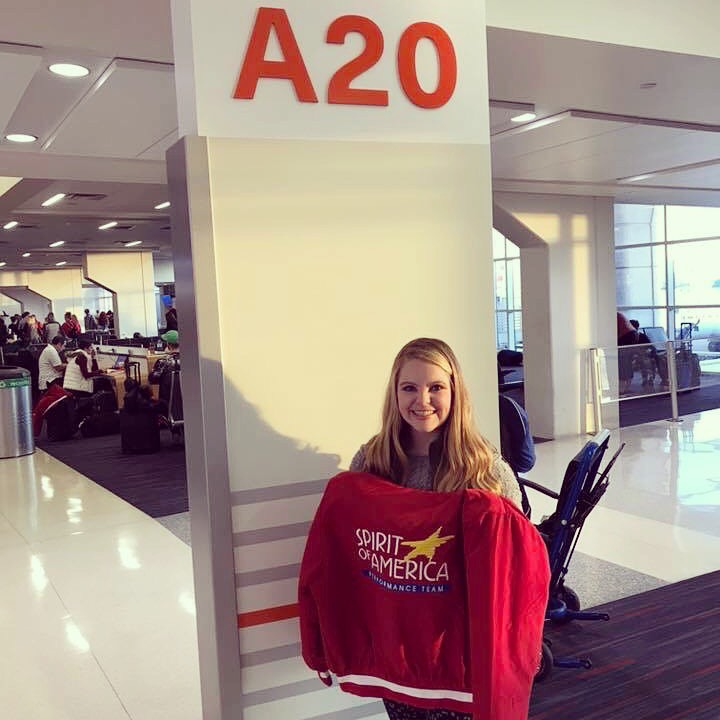 Stephanie Gray poses with her Spirit of America jacket. Gray had just arrived in New York to start practices.

Senior Stephanie Gray performed at the Macy’s Thanksgiving Day Parade. To be eligible, Gray had to try out and make the All-American Dance Team.

Every summer, during the drill team’s practices, there is an audition for the All-American team. The girls are taught a routine and perform it in front of representatives of the team.

“The All-American tryout routine is difficult,” senior Cassie Bennett said. “It challenges you on different skills of dance and shows each dancer’s individual talent.”

Once you make the All-American team, there are many available performances the dancer can participate in. The company does many performances, and the biggest one is the Macy’s Thanksgiving Day Parade.

“I am so excited for Stephanie and this once in a lifetime opportunity to perform at the Macy’s Thanksgiving Day Parade,” drill team director Keri Pierce said. “In addition to getting to spend the week in New York, she got to meet other dancers from around the country and perform at one of the most celebrated parades in the world.”

Gray, after finding out she made All-American, registered with Spirit of American, made her deposits and booked her fights. In total, the cost for each person was about $5000. Gray didn’t do fundraising but instead worked small, odd jobs like house-sitting, dog-sitting, babysitting and taking donations for bake items her mother baked.

“Stephanie worked really hard to earn the money for New York,” Bennett said. “She is a wonderful dancer, and I am so glad she got to have this awesome opportunity.”

While in New York, she spent her first day in a five hour practice, and then the next day in a six hour practice. These days were used to get spots and learn, step by step, the dance she would perform. The third night was a night rehearsal for NBC on 34th street in front of Macy’s.

“Getting to go to New York was so fun,” Gray said. “I went in January with drill team, so going back was even more fun knowing that there was more to do than when I went in January!”

On the day of the Thanksgiving Day parade, they started at 82nd street and marched all the way down to 34th street right in front of Macy’s. They had different chants and cheers that they yelled during the parade.

“My toes were frozen, and my mouth was numb from smiling the whole time,” Gray said. “I wouldn’t trade that experience for the world. I was so blessed to have been able to do it.”