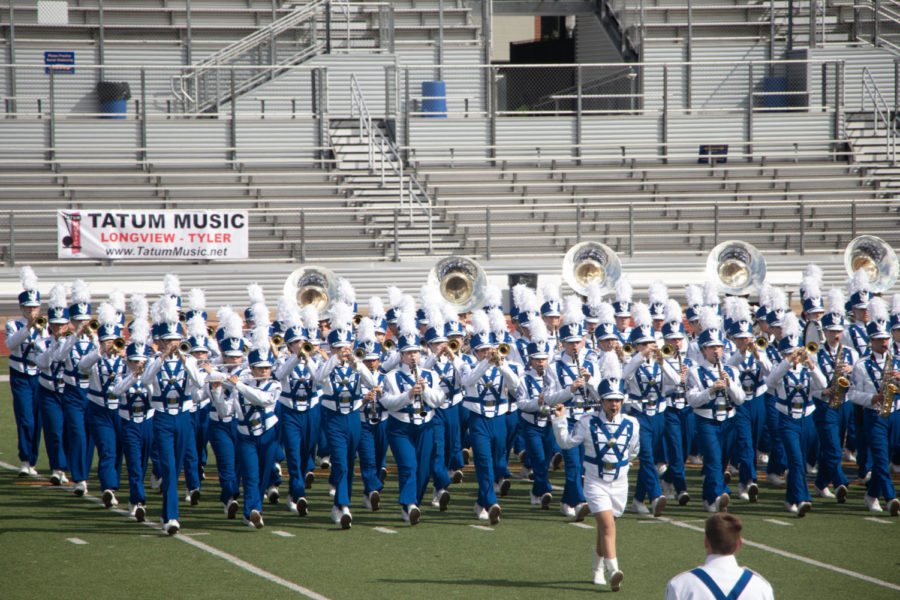 The band marches at the state competition. "I am proud of how well everyone did while marching," junior Christiana Ussery said. "They've done such a great job this year and will continue through the next competitions."

They wait to hear their name called. Could they have done it? Could they have placed at regionals? They are only freshmen, and it is not every day a freshman advances on to state in their events. Then, their name gets called and they walk up to the podium. Many students in the high school have lived this story, waiting to know if they advanced to state, but only a handful of them are freshmen.

This year several freshmen have qualified for and competed in state competitions for their extracurricular activities. These activities include band, fishing, golf, cross country, and tennis.

“It is exciting for all of us to have freshmen going to state this year,” golf coach Lindsay Kelly said. “It’s exciting for me as a coach and for the players on the team since they get to see so much success while being so young.”

Freshmen Jackson Delivaudais, Greyson Cassity, Cristian Mata, Carson Coe, and Josie Roach advanced to state in band. Along with being a part of the back-to-back state military marching band champions, they advanced through other events in UIL solo and ensemble contest.

“My favorite part about [competing in an ensemble] is getting to better myself as a player,” Roach said. “Not only does it help me but it also, in the end, helps the whole band. It’s also fun getting to know the people in my ensemble and working together in order to be successful.”

Freshmen Brady Hilliard and Trey Rozell advanced to state in bass fishing. In competition, they go out on boats and fish for a set amount of time. Wins come from the size and weight of the fish they catch.

“I really enjoy fishing,” Hilliard said. “I’ve done it for most of my life, and it never gets old. I’m proud of myself for making it so far, and I hope I can do it three more times.”

Freshman Kenzie McClenny advanced in golf to state. She placed in the top 20. She has been playing golf since she was ten years old.

“I love playing golf, especially with my team this year,” McClenny said. “It has been extremely fun getting to spend time with my new friends after the tournaments. It has also been fun doing so well this year. Hopefully the whole team will join me next year.”

Freshman Bre Taylor competed at state competition for tennis. She competed in girls doubles alongside junior Taegan Michel, and they ended their season with a record of 34 wins and 5 losses. They are district champions and placed 2nd at regionals..

“My doubles partner Taegan Michel is one of the best people around,” Taylor said. “I’m so glad that I got to play with her and experience state alongside her. It was a ton of fun and I cannot wait for next year.”

Freshman Gaby Saboia participated in the two mile run at the cross country state competition in the fall. She placed second in district, then advanced to state through her high placement in the regionals competition.

“My favorite part of cross country was that I got to make new friends and hang out with the team,” Saboia said. “State was very fun and very cool, but I wish I could have brought more people.”