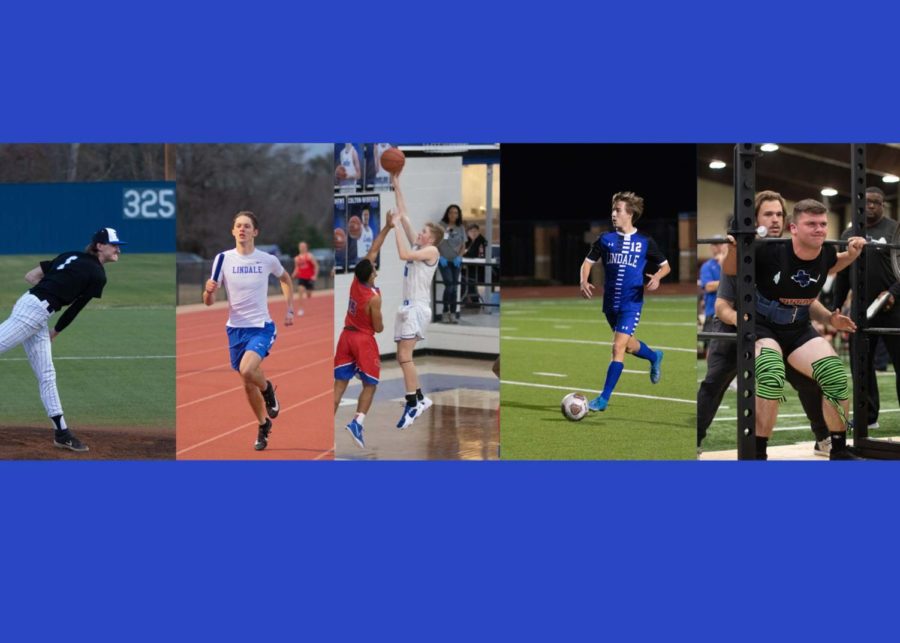 These are the students featured in the story. From left to right: Sam Peterson, Evan Alford, Taegan Terry, Cole Falco, Gabe Hart. Collage by Jaxson Buttram.

He dribbles the orange ball down the court. Its twang contrasts the squeaking of the players’ shoes. His focus is on the goal as he drives the ball down the lane, surrounded by his opponents. Stopping at the semicircle, he breathes, takes the ball to his head, and shoots.

The Eagles teams started their winter season this semester. Each team showcased their skills with some making it to the playoffs, including soccer and basketball while powerlifting made it to state.

“I’m proud of all of our boys sports programs this year and how much they have accomplished,” principal Jeremy Chilek said. “I’m really proud of the leadership coach Cochran has established and the culture that has been created amongst the entire department.”

Senior Taegan Terry plays for the varsity basketball team. Terry has been playing basketball since he was a child, since everyone in his family plays the sport. He is also a member of the tennis team and is a member of the National Honors Society (NHS).

“Our team is pretty close, we all play well together and we just get along and work hard together,” Terry said. “I just enjoy being able to compete with my team.”

Terry plays on the team as a point guard. The point guard moves the ball up the court, makes sure that their teammates are in the right spots, and initiates the play.

“Taegan is a fantastic leader who prides himself in making everyone around him better,” basketball coach Cristopher Grotemat said. “He always plays his best basketball in our biggest games, which is a testament to his maturity and confidence.”

Senior Cole Falco plays on the varsity soccer team. Falco has been playing soccer for 13 years. After his parents decided to put him in soccer as a child, a former coach of his inspired him to keep playing.

“I just love being part of a team,” Falco said. “I think soccer, more than other sport, is team oriented because every player plays a role, there can’t be one weak link.”

“I am very proud of Cole’s hard work and dedication to the team,” soccer coach Jason Lawless said. “He is one of our captains and leader on the defense.”

Junior Gabriel Hart competes on the powerlifting team. Hart has been competing with powerlifting for three years. Hart was inspired to do powerlifting by his dad, because his dad worked out and he wanted to follow in his father’s footsteps.

“What I like most about powerlifting is that you get to compete with a bunch of stronger people. You don’t really get that chance a lot of the time,” Hart said. “We have a very good team. We support and encourage each other whenever we’re lifting.”

To prepare for a powerlifting meet, the team doesn’t work out in the two days prior to the meet, the team trains everyday after school to get stronger.

Senior Sam Peterson is a pitcher and an infielder for the varsity baseball team. Peterson has been playing baseball since he was three years old, and was inspired to play because his older brother played before him. He is also a member of NHS.

“My favorite thing about baseball is just the competitive aspect of it, and how it makes you work hard and accept failure,” Peterson said. “The team this season is gritty, hardworking, we want to win so bad and that’s what you need in a baseball team.”

Senior Evan Alford has been competing in track for 6 years. Alford competes in long jump, triple jump, the 4 by 2 and the 4 by 4. He started competing in track to get faster and stronger for football season, but now he competes because the people inspire him to show up and they really love what they do.

“I run the 4 by 4 and my favorite thing about that is just being able to run it with people,” Alford said. “It’s a hard race and it takes a lot of determination to win. You can do track no matter if you’re fast or if you’re strong. No matter what anyone can do track.”