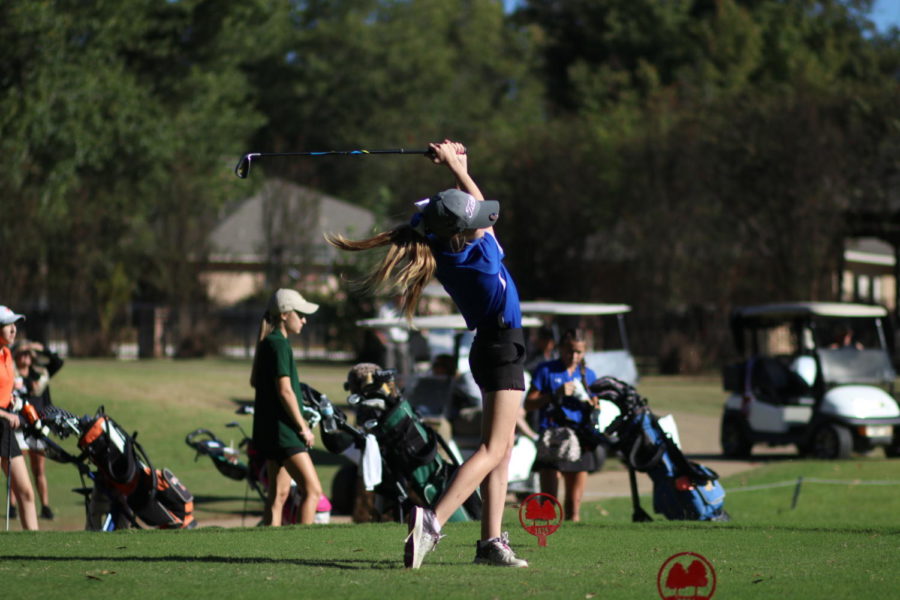 She takes a deep breath, going over the shot in her head. A 10 foot putt is all she needs to score par on the most important tournament of the season. The lie of the grass, the slant of the green, and the wind will all contribute to how the shot will go. She stares at the ball, gently swings the putter back, and lightly taps the ball. Freshman Kenzie Mcclenny beams proudly as she watches it slowly sink in the hole.

Both the boys and girls teams will travel together and compete throughout the fall and spring. Freshmen Kenzie McClenny and Jackson Pullin were both chosen by their coach as outstanding players.

“Usually freshmen don’t have really any knowledge at all and we are starting at the very beginning like just how to properly hold a club, and what a swing looks like,” head golf coach Lindsay Kelly said. “Whereas with Jackson and Kenzie, they already have that part down so now I’m teaching them, you know, what I work with my sophomores, juniors, and even seniors because they are already so far ahead.”

McClenny has played golf since the age of 10 and freshman Jackson Pullin has played since he was five years old.

“Both of these student athletes have been playing golf since before high school, which is not normally how it goes,” Kelly said. “Having some kids who have actually played golf before high school is exciting for all of us, for me as a coach and for the players on the team because they already have some of those basics down and so we are just helping them improve from what they already know.”

Golf plays preliminary tournaments in the fall, but the actual season does not begin until January. Some students also play in tournaments individually outside of school.

“I play for the Texas PGA,” McClenny said. “I have won a bunch of awards because I play every weekend.”

McClenny and Pullin are the only freshmen on the golf team this year. Throughout this season, they will build on their skills to prepare for district, regionals, and state at the end of the year.

“Here in recent years, a lot of times the golfers come to me as brand new beginners, and so we build from nothing,” Kelly said. “Basically we start from scratch on their golf game and build on it through the years. I would say they are a little bit further along in their games at this stage being freshmen.”