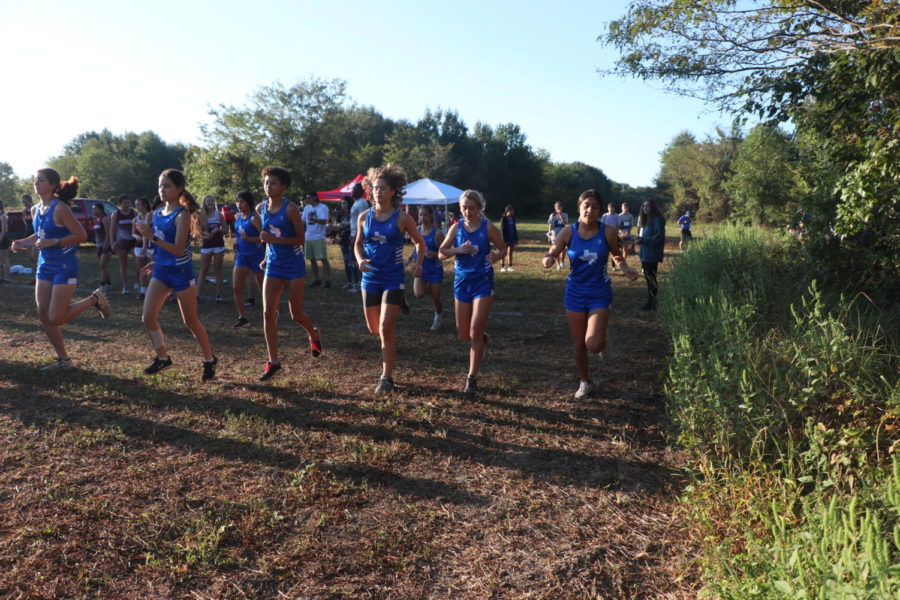 Cross country girls team begin running their race. Saboia is amongst them.

The wind blows past the runners as they pick up speed. The last leg of the race is ahead of them just in time for one last push. The ground rumbles as the runners all fight to make it to the finish line. The rush of blue captures the eyes of watchers holding their gaze until the very last second. Runners, junior Alex Guttierrez and freshman Gaby Saboia finish the race taking one of the top ten spots.

Guttierrez and Saboia run cross country, helping to bring home a win this season. Both students compete in cross country with Gaby making it to State.

“Our season has been great, “ coach Chris Grotemat said. “Both our boys and girls teams are off to strong seasons.”

Saboia was born in João Pessoa, Brazil, before moving to the United States at the age of three with her parents for missionary work. Saboia has been running all her life but started doing cross country three years ago.“I mainly think of my friends and the people around me as motivation,” Saboia said. “Then I have faith in myself saying that I have to make them proud enough to be up to their standards.“

In junior high, she broke many school records participating in the 400, 800 and the 1600 meter relay during track. This year she plans to run longer distances with the help of her cross country training. Not only that, Saboia won district twice back at the junior high as well as coming in at top 10 in most races.

“When I broke the school records I was really proud of myself because I didn’t think that I could do it,” Saboia said. “But with all of the training that I did and all the help, I actually made it and I broke it.”

Saboia was the silver medalist in District and finished as one of the top runners at Regionals to qualify for State. Along with cross country, she plays basketball, volleyball, soccer, and track with goals to try other sports. In her freetime, Saboia plays both the piano and trumpet

“She’s a tremendous worker and a multi-sport athlete,” Grotemat said. “She has quickly risen the ranks on the varsity ladder and has a slew of top 10 finishes so far.”

Gutierrez was born in Tennessee and later moved to Texas in the third grade. He began running cross country three years ago and plans to continue through high school.

Gutierrez runs every morning as well as participating at meets every Thursday or Saturday for cross country. He also participates in track and field.

‘I’m really excited for me and my friends to do good,” Gutierrez said. “We have all improved a lot and we help each other improve.”

As a third year runner and upperclassmen, Gutierrez takes up a leadership role with the sport. He is one of the top 15 best runners in the district and is constantly improving.

“He is always one of the first ones in and the last ones to leave,” Grotemat said. “He has put in a lot of extra work and it’s really paid off.”