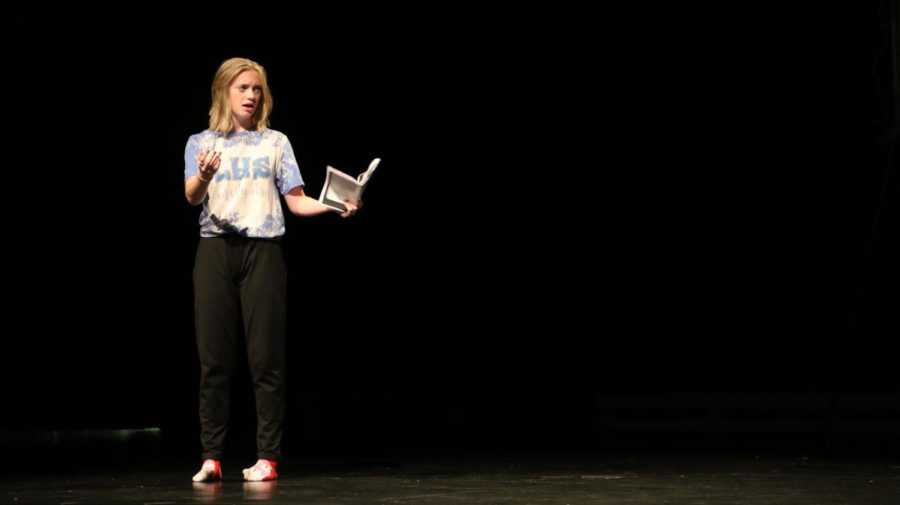 She walks up as the cast list is being posted on the wall. She looks at her shaky, clammy hands,  takes a deep breath and prepares to learn her role in the upcoming play. Junior Lauren Phillips is elated the moment she sees her name at the very top of the page, confirming she has received the lead role in her first ever play.

Phillips is preparing for the role of Alice in ‘Alice in Wonderland,’ which debuts September 30.  This will be the first play she has played a role in as a member of the high school theater program.

“Lauren is doing great with the part,” theater director Kari McKenzie said. “The play is right on mark for where we should be at this time.”
Phillips decided to try out for a lead role in her first play of the year. The play is set in an eclectic fantasy world filled with many bizarre characters and events.

“I am so excited for this role,” Phillips said. “Theater was a very spontaneous decision for me, and it was just something that I wanted to try because I was put in the class last year, but I have found so much genuine passion for it, and I’m just so excited to have such a big part in this production.”

Phillips was in a theater class during her sophomore year, but she decided to officially join the program this year. Directors Taylor Jarman and McKenzie encouraged her to try out for the fall play.

“I think Lauren is doing a great job as Alice,” McKenzie said. ”She’s never been on stage before, and when she auditioned she just had this really beautiful kind of childlike innocence that, I think, Alice has to have and so she’s fitting really well into the part. And additionally, she’s doing a really great British accent which is not something a lot of beginning actors can do, so she’s doing some really good work.”

After school practices are Mondays, Tuesdays, and Thursdays from 3:30 to 5:00. The cast started practicing a couple weeks ago and will continue to practice until the play is over at the end of September.

The last night of the play will be September 26. There will be a second play this year, and Phillips has decided to try out for that one as well.