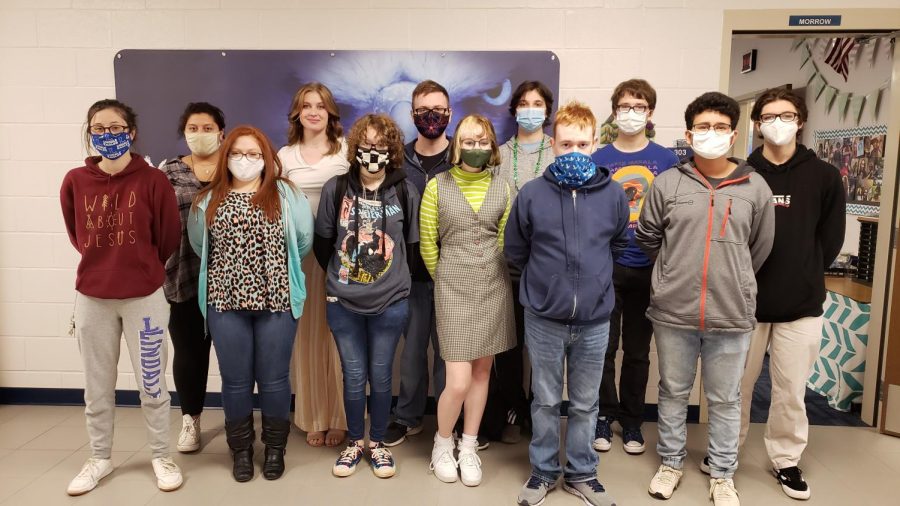 The EagleVision team poses after learning that two of their films placed 1st and 2nd at the UIL Young Filmmakers State Championship.

They look back on when they each had to take care of their own piece of equipment, adjusting lights and focus. They remember the adviser shouting “Quiet on the set!” They think about the months-long work of interviews or script writing, filming, and hour after hour spent editing. They gather in the auditorium to see if their hard work has paid off as the UIL Young Filmmakers Virtual Awards Ceremony begins.

The EagleVison AV Film team won first place in the State UIL film competition for their documentary ‘Unconventional Love: Not Your Ordinary Adoptions.”  In partnership with the LHS Theater Program, the EagleVision team also won silver in the  narrative film category for ‘The Missing Piece’, and the results were announced virtually on March 6.

“One of the main things they want is to do is a piece that means something and is not just fluff,” UIL film adviser Neda Morrow said. “So this year they did it on something that they felt like had meaning for many of our students and community, which was the life-changing effects of adoption.”

EagleVision began the filming process in October. For the documentary, the students first chose to interview Lindsay Cochran, wife of the head football coach, Chris Cochran, from her home. Filming had some differences this year in that there were many Covid protocols that had to be followed to keep everyone safe.

“I found it very interesting to be able to take the bus to the Cochran’s house and experience and hear first-hand stories from someone who has adopted,” crew member Esther Tidwell said. “It really helped to add a special contrast between adopters and adoptees in our film, since we also interviewed kids from school who have been adopted.”

The film crew interviewed multiple students and staff members about the effects of adoptions in their lives.  Directors Lauren Knox and Braulio Navarro worked with fellow students in the Advanced Film class on the cinematography, and then they spent the fall semester editing the piece.

“What we wanted the audience to [see] was how powerful adoption is and how it can change a life,”  director Lauren Knox said.

Throughout the process, the crew learned about many aspects of adoption that often go unnoticed, from the choices involved in open and closed adoptions, as well as the trials of adopting a child with extreme medical needs.

“Hearing the stories of the trials and tribulations of being a parent who adopts a child has impacted not only our film in a highly positive way, but has also impacted me myself,” Tidwell said. “Certain situations that our [own] crew has   struck me with a large sense of emotion.”

For the narrative film, EagleVision  partnered with the theater class. The theater students came up with the idea, created the storyboard, and planned the dialogue and scenes.  EagleVision then shot the film at the park and at Neda Morrow’s house and then spent the semester editing it.

“We always love working with [the theater department] so we took the opportunity and we went out, filmed it, and it came out great,” narrative director Miles Hill said.

It follows the story of a family with a daughter who has autism and the challenges they face. To get interesting shots, they filmed parts of the narrative from the point of view of one of the characters.

“In the film, the [autistic child’s] parents really are having a hard time dealing with [it],” Hill said. “Then, an opportunity arises to fix the situation and if you watch the film, you’ll see what happens.”

This was Hill’s first time directing a narrative film. He worked in partnership on the video with senior Jeffery Ptak and senior Madison Beaird who directed the theater portion of the film.  Ben Watters and ElsaBeth Schwind, along with Beaird, were the principal actors in the piece as well.

“Normally, I wouldn’t pick to direct a narrative film, but I was really compelled by the story,” Hill said. “I might never film another narrative film again, but after reading the storyboard for this one I decided that this would be the one that I would direct.”

While the UIL film team has won four medals at UIL state in the last two years, this was the first time a narrative film placed for the school.

“It felt awesome to know that we placed second,” Hill said. “It was exciting to be the first to win in the category and I’ll remember that from high school.”