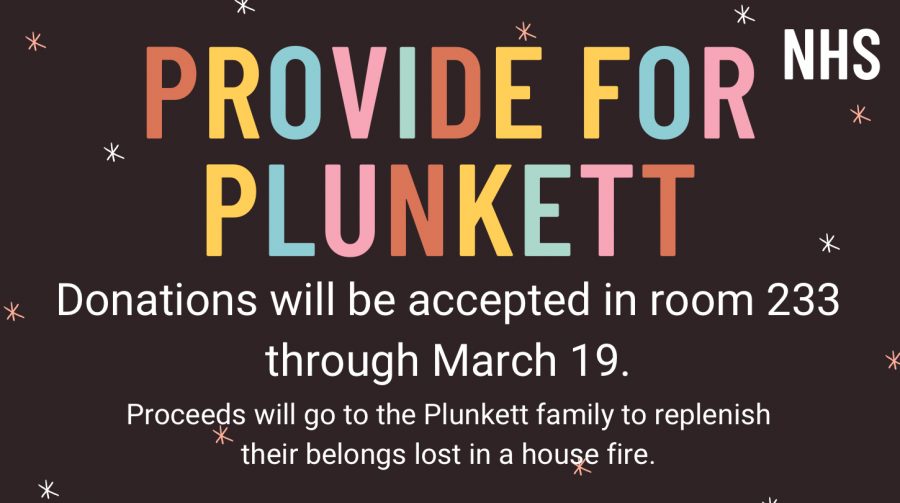 NHS hosts fundraiser for the Plunkett family, who's home burned down on February 25. It will end this Friday, March 19.

On February 25, students Carson and Madison Plunkett’s family home was struck by lightning and burned down. In light of this, the National Honors Society will be accepting donations in room 233 through March 19.

“I just think it’s a really neat because it’s entirely a student-lead idea and project,” NHS coordinator Sally Clemmons said. “I had nothing to do with it, our students here are really kind and want to give, we have great young people and this is just another example of them wanting to help one of their own through a tough time.”

All of the money donated will go towards the family in the form of Visa gift cards after all of the money is collected. Any member of NHS can redeem an hour of service hours for five dollars.

“Our goal is to collect as many donations as possible to help relieve what the Plunketts lost,” NHS president Rebekah Beard said. “We know that we can never fully undo the damage done, but hope that at least a crack can be formed by the generosity of those that donate.”

Beard, along with the officers of NHS, came up with the idea for a fundraiser shortly after the event took place. Having done projects similar to this in the past, it looked like it would be a great opportunity to help fellow students as well as get hours done with.

“It feels really good to know that our contributions are going directly to a family that suffered a great loss,” Beard said. “Every bit of donation helps and doesn’t go unnoticed.”