A Winter Queen is Crowned 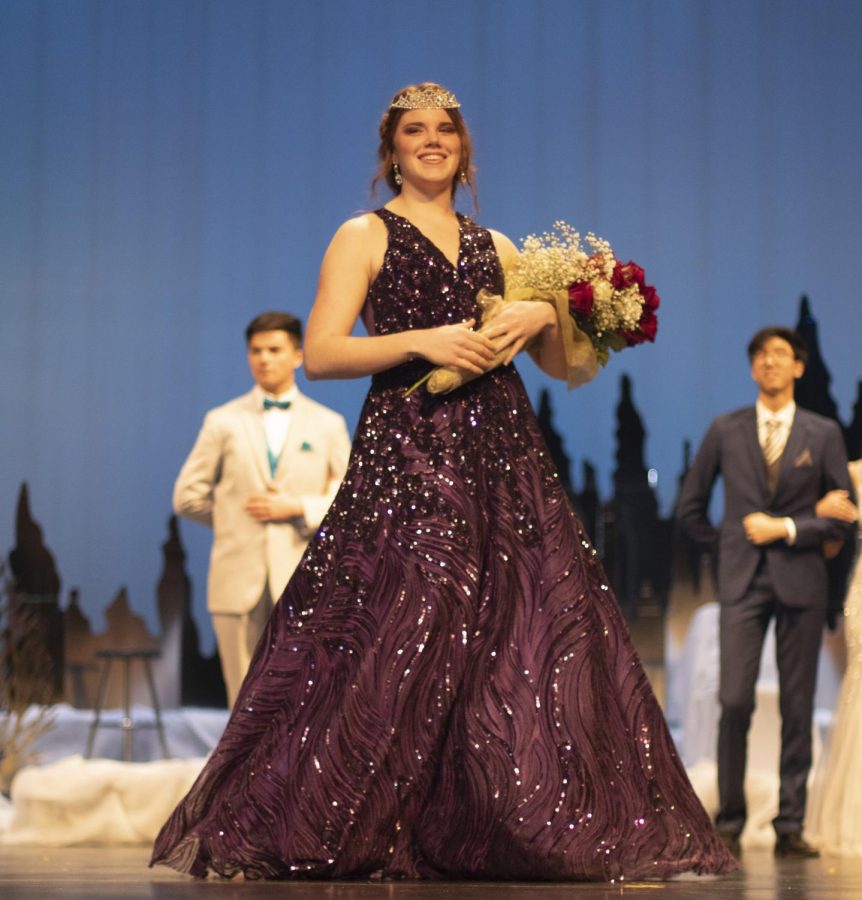 She walks toward her principal shocked and excited. Her purple dress sparkles in the stage light as she accepts her tiara and roses. Returning back to center stage, she looks toward her mom who also won Coronation queen her senior year. She beams as she gets to share another unique high school experience with her family. Senior Elizabeth Hutchens excitedly walks to the side of the stage to sit on her throne and enjoy the rest of Coronation.

Hutchens was crowned coronation queen last Saturday during the Winter Wonderland themed Coronation. She had been nominated alongside seniors Jade Ross, Chloe Harbuck, and Ashley Droblyn.

“Coronation is a really fun tradition that we put on in Lindale,” Droblyn said. “It’s really nice to get to dress up in a way we don’t normally.”

In 1995, Hutchens’ mother, Kindi Hutchens, won coronation queen. Several other family members have also been a part of the event.

“It’s really cool to see a family participate in the same events and win the same things,” senior Lauren Knox said. “They’re really close with each other and this will be another thing that brings them together.”

Ross was the Freshman Queen Nominee and she is involved in theater. Her friends describe her as funny, a quick thinker, and always willing to help.

”I’m excited to be able to dress up and represent the school,” Ross said. “I was really shocked when they announced my name, even though I had campaigned for it.”

Hutchens was the Sophomore Queen Nominee and she is involved in volleyball and NHS. Her friends describe her as motivating, thoughtful, and fun to be around.

“My brother is a sophomore and he’s my biggest cheerleader,” Hutchens said. “He definitely played a role in my being nominated.”

Harbuck was the junior Queen Nominee and is involved in band, NHS, and the Texas Bank and Trust Student Board. Her friends describe her as a hard-worker, funny, and helpful.

“I feel really loved by the community around me,” Harbuck said. “It’s really nice to get recognized for my hard work and it’ll be fun to get dressed up.”

Droblyn was the senior Queen Nominee and is involved in band, NHS, and the Texas Bank and Trust Student Board. Her friends describe her as funny, kind, and someone that brightens up any room.

“I’m really honored to be nominated by my class,” Droblyn said. “I feel really loved and appreciated by them.”