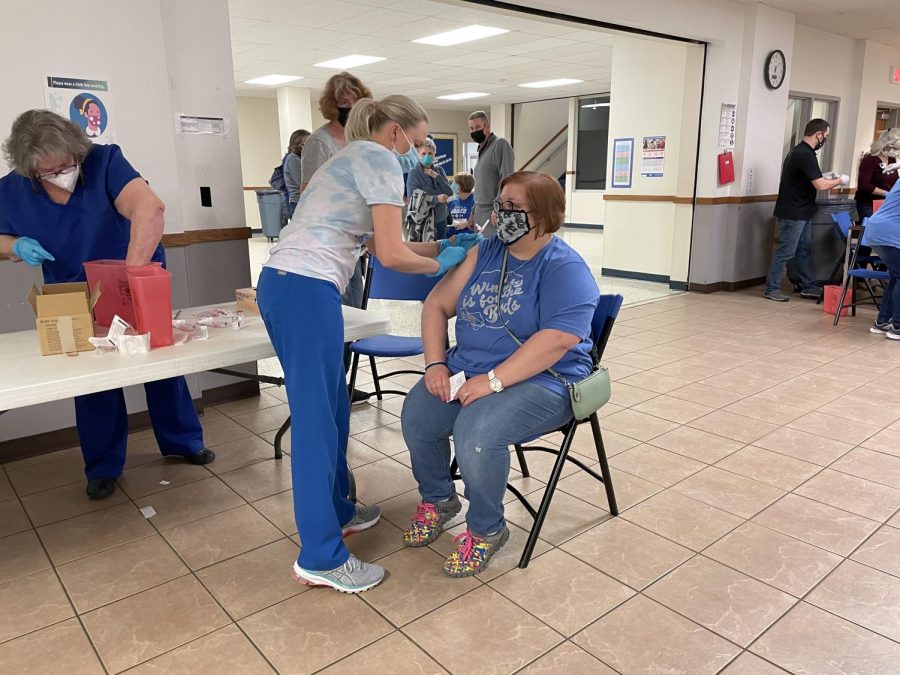 Staff members receive the second dose of the Moderna COVID-19 Vaccine on February 5. They received the first dose in late December/early January.

He pushes open the elementary’s doors and breathes in a nostalgic scent and is handed a clipboard with paperwork waiting to be filled out as he joins the line of familiar faces. He fills out his name, date of birth and date of his first dose. After he’s done, he hands it to the nearest medical professional and is cleared to received his second dose of the Moderna COVID-19 vaccine. He feels a little prick in his arm and after fifteen minutes is cleared to leave.

On February 5 Lindale ISD staff members received their second dose of the Moderna COVID-19 vaccine in the EJ Moss West cafeteria. The first dose was administered late last December/early January, and a potential booster shot may be administered in the future.

“Pharmacist John Droblyn contacted me about offering the vaccine to teachers and other staff members,” Superintendent Stan Surratt said. “He wanted to give some protection to teachers and school employees, as well as making schools safer for students, staff, and parents.”

The process of getting vaccines in pharmacies isn’t nearly as simple as it is for other vaccines though. Since COVID-19 is so new and the vaccines even more so, there is a long list of certifications and procedures to be done by any pharmacy wishing to administer vaccines, with Eagle Pharmacy receiving 500 vaccines in the end.

“The details as to how a pharmacy gets involved in [the COVID vaccine] is very intense,” Droblyn said. “We started [applications] in september and were approved in November. Just because you are approved doesn’t mean that you actually get the vaccine, so we had to put in the required population information, the information of our store and at our store we received our first on December 28th.”

Not only are there numerous hoops to jump through for the pharmacy, but the same can be said for the administration as well. There was swift action taken to get that first dose into the arms of staff members and to take care of the community that they serve  alongside other measures that are being taken to prevent the spread of the virus.

Getting the COVID-19 vaccine to the teachers comes in a two-step process. The first dose is administered, and a few weeks to a month later the second dose follows to serve as a possible booster to the first.

“To me, the process of getting vaccinated was very simple,” speech and debate coach Rory McKenzie said. “They have a really efficient system and after the process we had to wait fifteen minutes just to make sure that we didn’t have any immediate reactions, but other than that it was an incredibly easy and simple experience.”

With the vaccination comes a much greater possibility that even if these teachers were to transmit the virus, that the symptoms are far less likely to become severe as compared to if they hadn’t. This gives peace of mind to many teachers who recently avoided things such as Christmas and other related festivities for the sake of complete safety amid the pandemic.

“COVID has created a world of uncertainty, so being able to control at least a piece of mind is really valuable,” McKenzie said. “The fact that Lindale, Mr. Surratt and Eagle pharmacy decided to make teachers a priority speaks volumes about the kind of support that we have in this district. Here we are in Lindale and even while we may be a little town we have good priorities.”