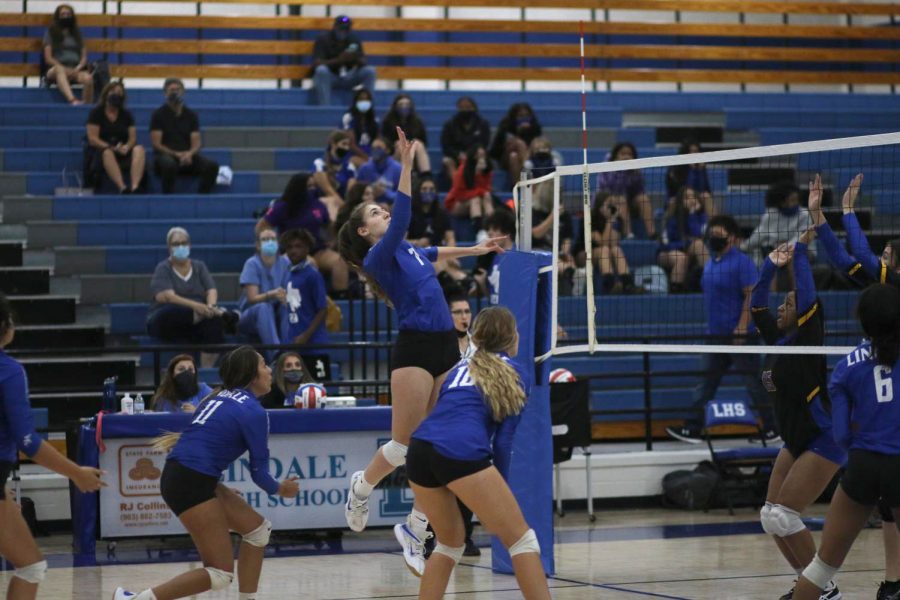 The crowd erupts in cheers as she hits the volleyball and the opposing team misses it. The other players run up and give high fives and claps. They have done it. Their hard work has paid off. As they head over to the rest of the team, senior Shelbi Steen smiles, knowing that there’s still so much more for the team to do–it’s playoff time.
The varsity volleyball team captured the district championship last night. Steen is an outside hitter on the volleyball team and has had helped lead the team to their current 26-0 overall and 12-0 in District 16-4A standing.
“The team is great this year,” volleyball head coach Jessica Dimsdle said. “Of course Shelbi contributes, but it really is a team effort. She does a good job rallying the team together and boosting morale.”
Steen has been playing volleyball since she was in third grade. She currently has over 377 kills, 28 blocks, 79 service points and 140 digs this season.
“I started because my mom was a coach,” Steen said. “I grew to love it over time.”
Most of the girls on the team have been playing volleyball together since the fifth grade. The team dynamic has led to their undefeated season so far.
“I think that the team works well together because we have played together [for so long],” Steen said. “We’ve spent a lot of time together and have learned how each other work.”
Steen is a hard worker on and off of the court. She makes good grades and works on her skills whenever she gets the chance.
“I was one of Shelbi’s teachers her freshman year,” Dimsdle said. “She was a great student. Even now, when we go to tournaments she’s doing her work on the bus.”

Steen is also a captain on the team. This means she helps hype the players up for their games and motivates them to do better as much as possible.

“I think Shelbi has impacted the team by being a leader by example,” senior Kalaya Pierce said. “She plays aggressively, motivates her team to do great things and plays hard every game.”

The volleyball team has won every game they’ve played so far. They will go on to play in regionals, and possibly make it to state for the first time in 25 years.
“I’m really proud of the girls this season,” Dimsdle said. “They’ve all worked hard to reach where they are this season.