A Look at Apple Versus Android Phones 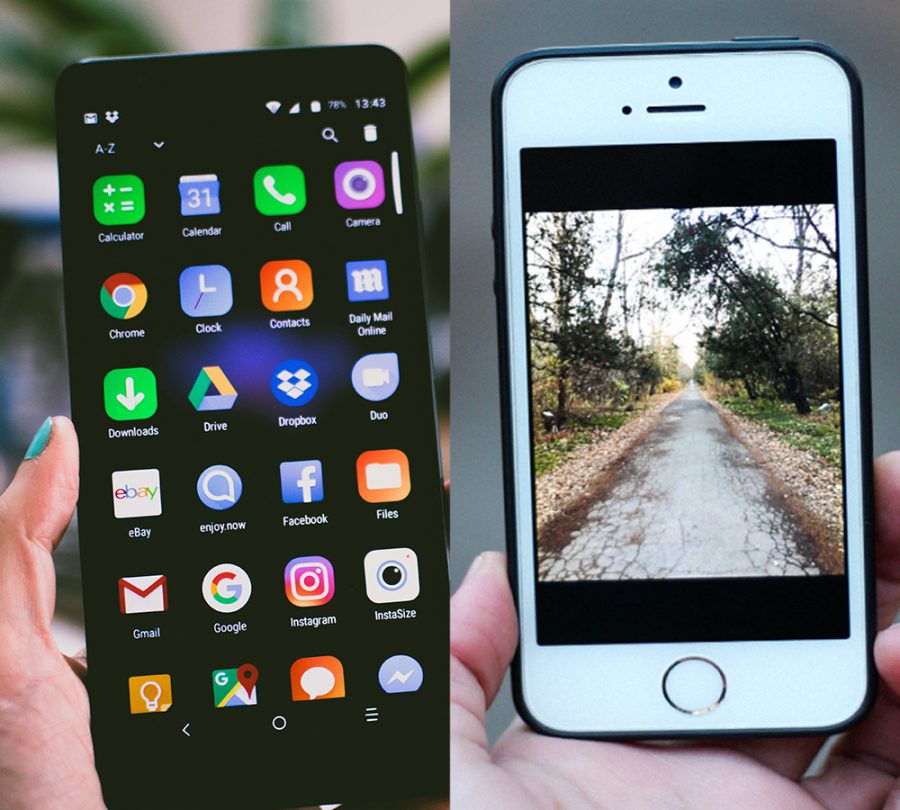 Since the early 2000s phone owners have argued which phone company is better: Apple or Android. But, the answer isn’t as simple as that. Which type of phone is better depends purely on the user and their preferences. So, if you’re looking to buy a new phone or simply curious as to what each company has to offer–here is your guide.

Android ‘smartphones’ have been around since 2008 and it’s first release was the T-Mobile G1. Granted smartphones have come a long way since then, Android still has proven to be a fan favorite, but based on a recent poll of LHS students out of 200 people only a quarter owned and preferred the Android. But despite that Android has amazing qualities.“I enjoy the fact that it has decent space and storage,” junior Madison Beaird said. “The battery also lasts a really long time.” Other points that make Androids great:

A common theme among android users was the appreciation of being able to customize their phone to their preferences. It is a lot easier than most Apple products because of its open operating system. And because of the wide range of Android devices, you can get a specific model and phone to match your needs.

With Android instead of having to upgrade and pay for more memory, you can simply purchase a card with upgraded memory. Most come with a microSD slot in order to add additional memory when needed. Most iPhones require you to pay more per month for more storage.

Many also favor Android because of its hardware and durability. You can drop them and they often won’t crack, especially if it has a case. But even more so than that, Android repeatedly outperforms iPhone when it comes to battery. It consumes less and prolongs the use of the phone.

The first “smartphone” was released by Apple in 2007. Ever since its release it was a fan favorite and out of a recent poll of LHS students, three quarters of the 200 polled preferred it over Android. Other than being a name brand it also has amazing qualities. “I really enjoy using my iPhone, especially with the new camera features and abilities,” junior Conner Belcher said. “The quality of the pictures are phenomenal.”

Recently,  Apple products have greatly improved camera quality to better match Androids. Pictures rarely appear pixelated, and after being sent to another device, the quality is still maintained. Apple just released the iPhone 11 which now comes with three lenses for optimum picture taking.

No matter what version of smartphone you decide to get under Apple, the user interface will always remain under iOS meaning that though its customization is minimal, it functions mostly the same way as the model before it.

Because the App Store is so regulated as well as Safari, iPhone users are prone to having less malware meaning less harmful and annoying bugs and viruses. It also protects iPhone users from having large amounts of Bloatware such as apps customized to certain cell phone carriers.

Whatever phone you decide to get it is best to look into if you are getting exactly what you want out of it, and that it will perform as you want it to. No one phone is better than another. Each phone offers its own advantages to its owner.