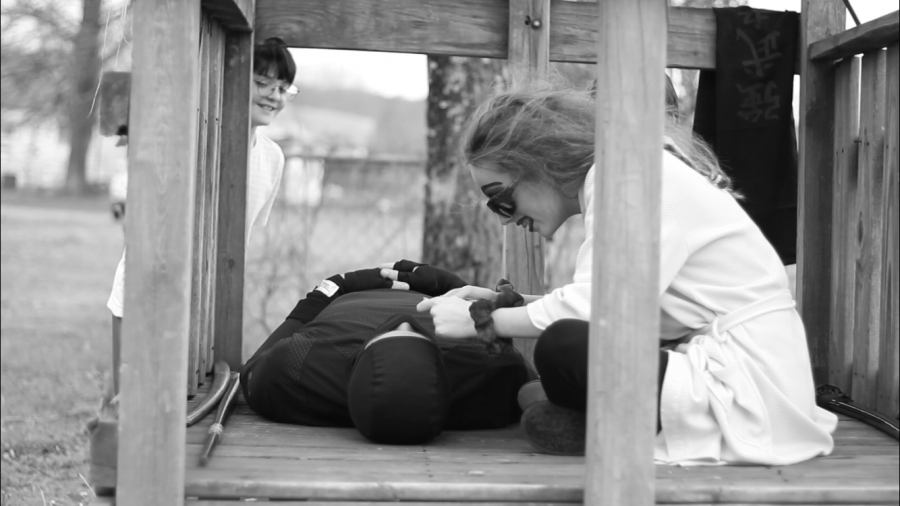 Alyssa Starkey and Daniel Smith star in senior Colleen Starkey's rendition of Frankenstein titled "FrankenNinja." The story revolves around the creation of a ninja that falls in love with its creator's sister.

The AP English IV class is making adaptations of Mary Shelley’s Frankenstein. The class has been given free reign as to how they portray the story as long as they retain one of the original themes of the novel.

“This project really helped us expand on the theme of how science can become evil,” senior Emma Grace Cox said. “It helped us to focus on that theme and see how that affected the book and everyday life.”

Students were free to choose what medium they made their adaptation on, resulting in a diverse range of presentations. Senior Alicia Mullings created an interactive adventure using her skills in computer programming.

“I plan on becoming a website developer, so I wanted to somehow combine this project with website development,” Mullings said. “Also, I enjoy writing and exploring new perspectives of ideas. By exploring the different possibilities, I became more familiar with how thin the line truly is between Frankenstein’s creation being a villain or victim, and it also enabled me to realize how the various choices of Victor eventually led to his demise.”

Many used their projects to express the themes of the novel in a comedic manner. One such group made a series of short videos on TikTok based off of the novel.

“I love Tik Toks,” Cox said. “I think the concept of their shortness and editing brings in humor to even boring videos. Since our topic was so deep, we wanted to bring in a humorous element and the Tik Toks did this.”

Shelley’s Frankenstein deals with themes such as the meaning of humanity and ideas of companionship turning to obsession. By participating in this activity, students better understand the themes of the novel.