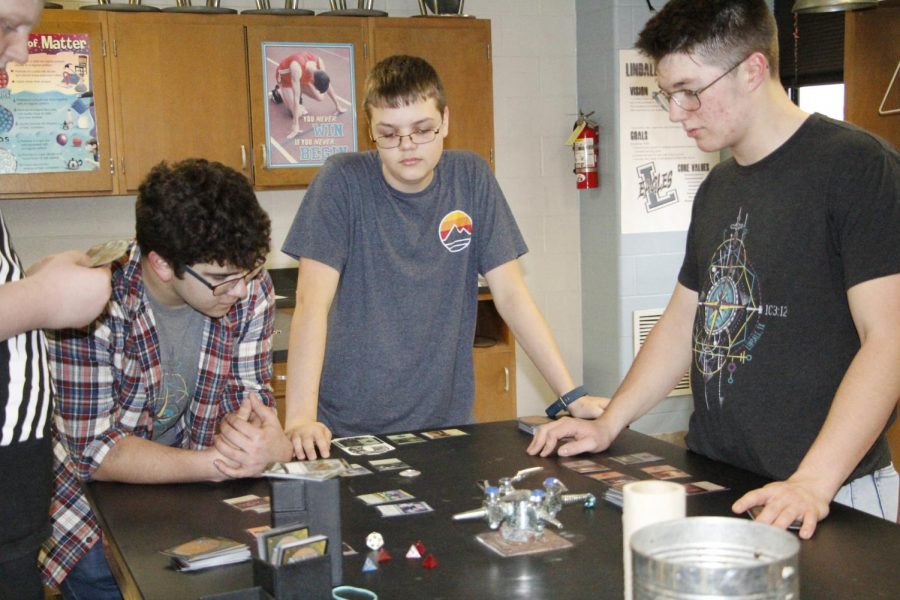 Students play Magic after school on January 29. "The club is a great experience for everyone," freshman Price Minter said. "It's very beginner friendly, so newcomers are welcome."

The trading card club, sponsored by science teacher Steven Hitt, has returned from its brief break for its usual 3:30-5:00 spot on Wednesdays. The club takes place in Hitt’s classroom, where they play ‘Magic: The Gathering.’
“I had to put the club on pause, as I was finishing graduate school, completing a certification and my third son was born the first few weeks of school,” Hitt said. “In other words, I had absolutely no time.”
The students who had previously been a part of the club had asked Hitt to bring the club back. The club has gotten new members through friends of the previous members.
“I originally had students who were in need of a sponsor for their club,” Hitt said. “I knew nothing about the game but offered to be the sponsor anyway. As I watched the students play, it intrigued me. I decided to join them once, and I have been playing ever since.”
The club is still open for new members. Even if someone can’t afford Magic or come every week, anyone is still welcome to come to it.
“I have been a part of the club for over a year,” sophomore Nate Fitzgerald said. “This year, there’s a bunch of new people who keep coming. Usually people would show up for the first meeting then not show up the next week. Now, we have a large continual new base.”