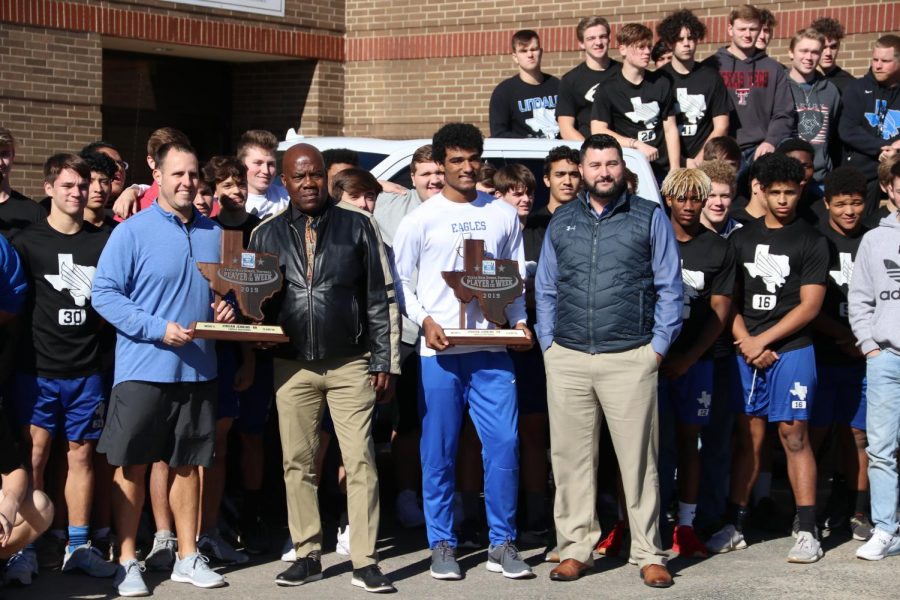 The team poses in front of the Ford. "The real awards are the times and memories I have with my teammates," Jenkins said. "It’s an honor to got this award and I’m glad I got it, but I won’t let it change me as a person."

Junior running back Jordan Jenkins received the Ford Tough Player of the Week Wednesday. This is a statewide honor for the best player by position.

“It’s pretty incredible,” head coach Chris Cochran said. “It makes me proud of Jordan, and I feel blessed to call him one of my players. It’s an honor and privilege to be able to coach him.”

In the last two weeks of the season, Jenkins amassed 498 yards for 11 touchdowns–all done in only 50 carries.

“I feel like I improved from this year to last, statistically speaking,” Jenkins said. “I definitely had a great year, but that’s what’s expected from me. I’m just doing my job for the team.”

In the last district game, he ran right 270 yards, and contributed eight touchdowns. Aside from the field, Jenkins also does well in the classroom.

“I make pretty good grades,” Jenkins said. “I think they chose me because not only do I perform very well on the field, but academically as well.”

Not only is this an award for him, but for his team as well. Wednesday, Ford came to take a large group picture with Jenkins and the rest of the football team.

“It shows that hard work does eventually pay off,” Jenkins said. “They know how hard I practice, work, and how much I sacrifice for the team, and I think seeing the reward will inspire them to know that they can do it as well.”