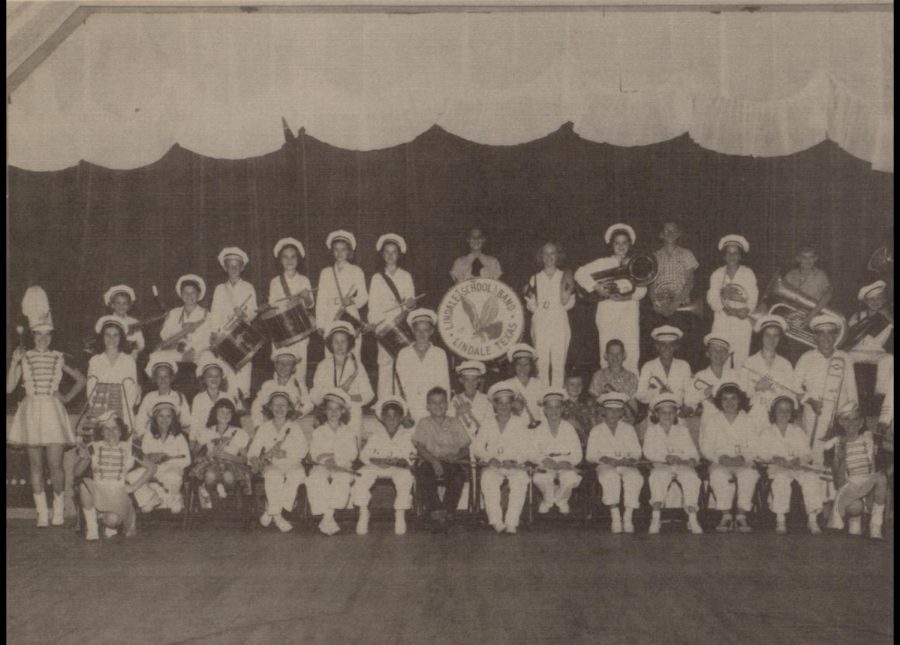 A photo of the original band taken from a previous yearbook.

They walk out onto the same field they’ve tread many times. The crowd cheers as the lights shine onto their collective faces. In their minds, they have only one thought, “preserve our legacy”. They look to their drum majors for guidance, hearts pounding in anticipation. The whistle blows, and they take their frst step.

This year marks the “Pride of Lindale” Eagle Band’s 70th anniversary since being founded in 1949. They will hold a special ceremony in honor of the band’s original members at their spring concert May 19 in the Performing Arts Center.

“We’ve been working with a young lady, actually one of the original band members, Mrs. Betty Garret, [to coordinate this event],” head band director Steven Moore said. “We’re going to try and get as many of those original band members that were here and can come to the concert to be there.”

Over the years, the Lindale band has made a name for itself as one of the leading military bands in Texas. Since it was founded in 1949, the band has attended the state marching contest twice.

“We consider the band to just be a big family,” Moore said. “We work hard together and I think the biggest thing is that students come out of this program having a big appreciation for music, but also knowing how to give of yourself for others and something bigger than yourself.”

“It’s kind of fun because both my mom and dad who went to Lindale High School and were both in the marching band, and then I was and my sister so it’s a long tradition,” Jarman said. “The band program means a lot to me, so I always love it when I have kids who are still involved and going to those competitions.”

Even those outside of the band recognize the band’s impressive legacy. Many Lindale teachers have participated in the band in some way.

“It’s really the individual members, the people that make up the band that make it great,” teacher Amy Thompson said. “The band’s reputation just continues to get better with the growth that Lindale sees.”

After 70 years, the Lindale band has changed significantly. However, the same ideals and values of the original band are still upheld today.

“I think the anniversary is more of a celebration of years of excellence and hard work and everything we’ve done,” head drum major Kaylee Petty said. “During practice and performances we always do our best so that we can show off when it’s time.”