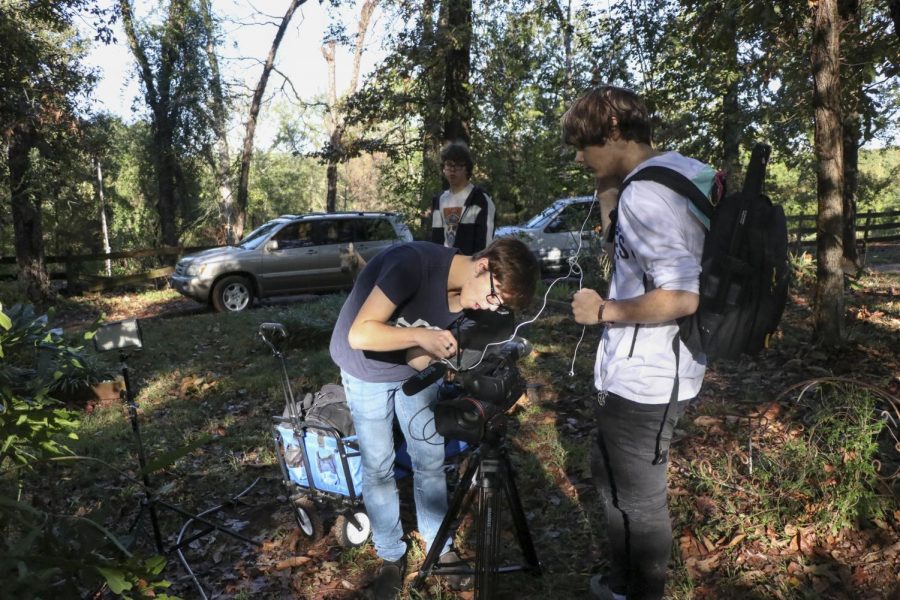 Sophomore Miles Hill and Senior Jude Ratcliff set up the camera for filming. The film club was filming the first narrative film.

The advanced audio and video students, film club members and advanced theatre classes are creating two documentaries and a narrative film. The movies are going to be to entered in the UIL Film Contest in late January.

“This project gives the students a chance to work together in a real-world filming environment,” film club director Neda Morrow said. “[Competitors] are able to use industry-standard equipment and software to create the films, and the theatre students are able to work on set in an authentic film-style setting.”

The narrative film centers around students in life skills and documents the real-world training they receive. The second film is a documentary about the impacts that Youth With a Mission (YWAM) has on the local community.

The third film is a fictional narrative about an unknown killer in a little town. It’s a suspense film that highlights the ability of killers to be incorporated in our everyday life.

“It was really fun shooting the films for the UIL competition,” junior Jeffrey Ptak said. “[The film] gives us a great opportunity to show off what we have learned”

The films are entered in the UIL contest in mid-January for evaluation. Films will later be posted to the Lindale Eagle Eye for the community.

“I am very proud of all the film and theatre students,” Morrow said. “They have worked very hard on both the documentaries and the narrative [films], and I can’t wait to see how they turn out.”