Singing With a Passion 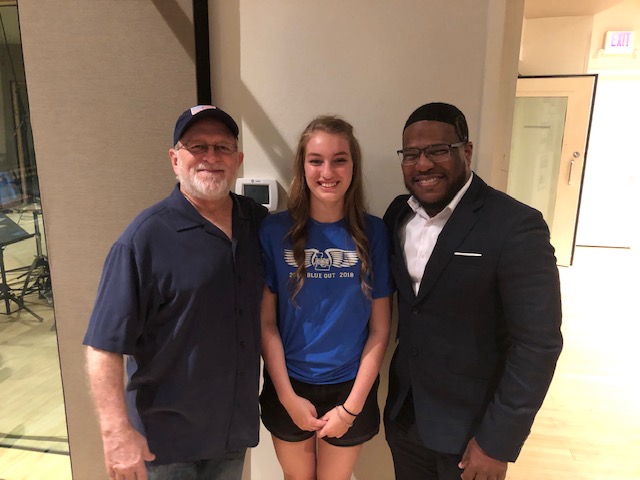 Gregory stands with two producers. This was after she recorded her original written songs "A Matter of Time" and "Secret."

Butterflies in her stomach, she walks into the studio. This is what she has always dreamed of. She stands in the room with producers nearby as she puts the headphones on and gets ready to sing her heart out to the beat of her original songs. Junior Jayden Gregory is doing what she loves.

“When I was 6 years old, I asked the worship leader at a Baptist church in Dugway, Utah, if I could sing on stage. When he agreed, I chose to sing the only song I knew by memory–Happy Birthday Jesus.”

Not much later she began playing the piano as well.

“There is something about it,” Gregory said. “The magic of it. The moment my finger hit a note on that keyboard, I fell in love. It was a simultaneous connection that I instantly felt between myself and music.”

Singing original songs on stage did not come as easily for her, and it wasn’t until she began performing in the Education Foundation’s Act programs that she shared her original songs.

“I was never nervous to sing on stage,” Gregory said. “When it came to exposing my original songs, however, I was always afraid. Everything I wrote was personal–used as an outlet to release my deepest, darkest secrets (feelings, passions, traumas, etc.) Everything I held inside and kept guarded against other people unveiled itself in the art of creating music.“

Last year, Jayden was able to do some recording in a local Tyler studio.  She has also competed twice in the East Texas Idol competition, and she made it to the finals once against contestants who were older and had more experience.

I think I have grown a lot [as a musician] because I keep coming in contact with experienced people who are willing to share their experiences with me,” Gregory said. “It is helping me grow not only as a musician, but as a person too.”

Jayden was recently doing a gig at Brisket Love in Lindale when a man named Billy Dorsey walked up to her on stage during a break in her set, and he told the crowd she was a natural. Dorsey is a Grammy-award winning producer who was there in search of new clients.  After meeting Dorsey, Jayden was able to travel to Houston with her mother and record in his studio.

“There were many talented people there that night,” Gregory said. “I do not know how this happened, but I do know that I am very honored to have this opportunity.

Music is a part of Gregory’s heritage as well. Her mother also played guitar and wrote music.. When she was expecting Jayden, she wished more than anything for her to be able to sing songs for her, leading her to give her the middle name of ‘Lyric.’

“She is constantly singing,” Jayden’s sister, Courtney Gregory said. “No matter what we are doing, she is always singing, so there is constant music all day.”

Jayden has released two singles, “A Matter of Time” and “Secret.”  They can be found on Spotify, Apple Music, and Google Play.

“There are no words,” Jayden Gregory said. “I’m so lucky to have run into such an opportunity and experience this and I am excited to share my music with the world.”