A Look at the Various Religions People Follow at LHS 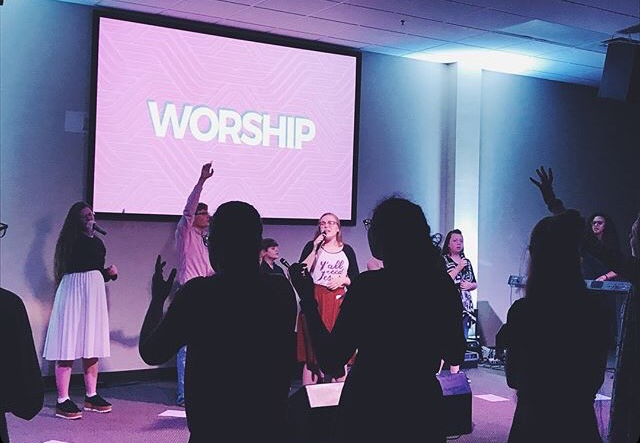 A worship service takes place in senior MacKenzie Yancy’s church. “In the Bible, it says to not live of the world,” Yancy said. “This means that if my friends are making poor decisions, I will stop hanging out with them because they will affect my own decisions.”

Every day students walk through the halls making the same route, passing the same people, not even noticing the differences that may be in each other’s lives. Students are taught to overlook these differences, and while that may be a good thing, some differences should be known about and even celebrated. One of these is religion, which can affect how a person lives their life.

Of the 202 people who responded to an Eagle Eye survey, the results of what religion students practice, if any, turned out to be similar to the national average.

“I enjoy learning about other religions,” sophomore Cody Peters said. “I feel like religion is a big part of what makes a person the way they are.”

Christianity–78%. Christianity is a religion where people believe that there are three parts of one God, the Trinity. They believe that Jesus, the son of God, came down to rescue those who believe in Him from their sins and bring them into Heaven for eternity.

“It is an amazing life to live that is filled with blessings and a lot of heartache,” senior Sydni Watts said. “The Bible says that if we devote our lives to him wholeheartedly we will be blessed, but we will also be persecuted. It’s a good fight of faith. It’s worth it. Our toiling is not in vain.”

Non-Religions, Agnostic, Atheist–20%.  Atheism is a system wherein individuals don’t believe in any faith or external exalted being and represented 1% of students in the survey. They go through life living according to their own beliefs on what is right or wrong and the laws of the places they’re in, not the laws of religion. Agnostics have neither faith nor disbelief in God and represented 1% of students in the survey. The largest group in this category were non-religious students at 18%. They may or may not have a belief system, but they don’t adhere to a specific religion.

“Everybody [here] is Christian, so it’s really strange sometimes,” sophomore Mikah Farmer said. “They don’t understand what it means to be an atheist. When they pray, I just stand there awkwardly because I don’t believe in what they are participating in.”

Buddhism and Hinduism–2%. Buddhism is a belief that isn’t centered around a certain entity. Buddhists follow the path to enlightenment to be reincarnated. It is a faith that allows for the followers to center themselves and work on being their best selves in hopes of reaching Nirvana.

“There are times where we’re sitting in class, [and] sometimes someone will say things like ‘other religions are wrong,’ ” junior La’Launa Moffitt said. “I don’t believe that because I encourage [others] to believe in what they believe, and they encourage me to believe what I believe in.”

Hinduism is a religion where the followers are working to reach enlightenment. Once they achieve enough good karma, they are reincarnated into Moksha where they become one God. 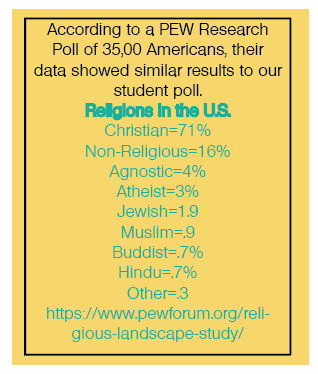 “It really helps you go through life with a purpose,” sophomore Aryan Patel said. “Karma is your good and bad points, so when trying to reach Moksha, we are working on being our best self.”

Non-Traditional Religions–1%. Norse is a polytheistic religion that works by believing in the old Norse gods. The followers of today don’t follow the old rituals but believe in the gods all the same.

“A lot of people believe that their religion is the only correct religion,” sophomore Max Walker said. “This means that I got bullied a lot in middle school, but now I just believe what I believe in and I let them believe.”

Theism is the belief that there is a god but that it doesn’t affect you. It means that those who believe in it are detached from the god and are living life by their laws.

“Certain religions have books that they study, but theists don’t have that,” sophomore Val Adams said. “This makes each of our beliefs slightly different.”

Wicca is a belief system that focuses on bringing the follower and the earth together as one. The followers thank the earth and connect their energies back into the universe.

“To me the most important thing is grounding yourself,” junior Keyana Korbol said. “It helps us know that everything is going to be dealt with whether it be by karma or by yourself, so your stress just goes away.”

Apostolic Pentecostal is a protestant denomination of the Christian faith that believes in Apostolic Oneness. Followers believe that men and women should be separated, and this is seen mostly in their physical appearance with the clothes they wear and through their hair.

Catholicism is a denomination of Christianity that calls their church service Mass and they confess to a priest instead of confessing directly to God. They also believe in the different saints, like Our Lady Guadalupe.

“When other people say Father or Jesus or Lord they have a different definition than I have,” freshman Alma Silva said. “My definition would be God, Jesus and the Holy Spirit but to them it may just be God, or Jesus, or just the Holy Spirit.”

While every religion is different, they are all support systems for how the followers decide to live their lives. Followers use their religion to help them go about their daily lives.

“I really hope more people speak about their religion more often,” Peters said. “It’s really interesting to learn others’ motives in life and helps motivate me to be a better person as well.”