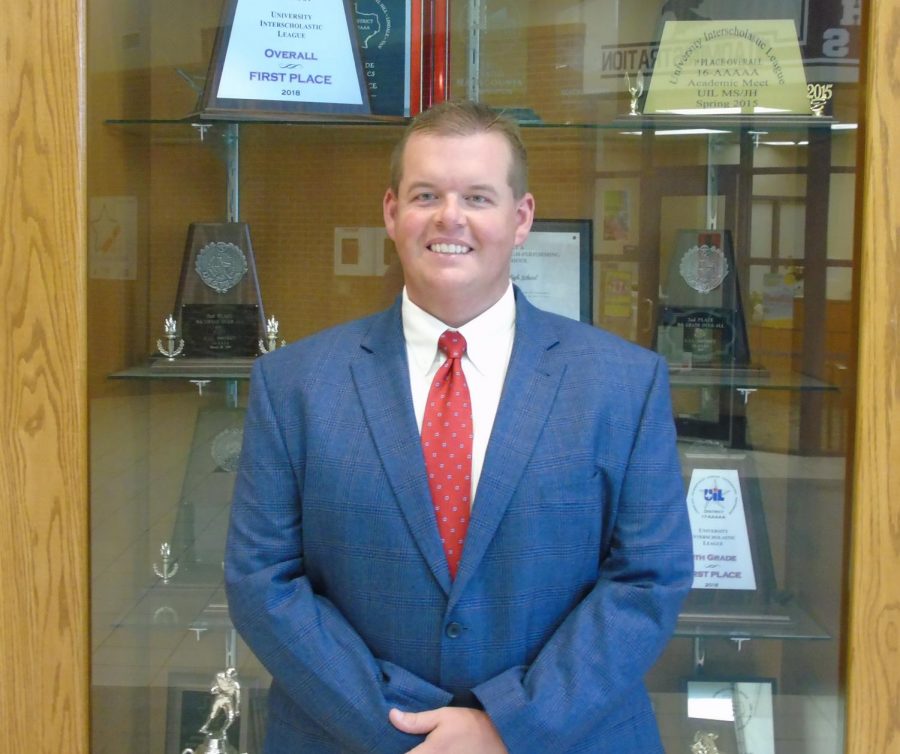 Chilek poses for a photo. He has been the principal for the junior high for five years.

He places the last few items from his desk into a box. He is only moving three miles away, but it is the biggest move he has had in his entire career. Looking back on his time as a student at Lindale High School, he never thought that one day he would be the one to lead it.

“It is an honor and a privilege to become the leader of such a fine campus,” Chilek said. “Mrs. [Valerie] Payne has done an amazing job leading this campus the past three years, and being able to continue with the great work she has done is exciting.”

“The deputy superintendent, Jamie Holder, is one of the primary people who have influenced me in my career and has been encouraging me to accept the job,” Chilek said. “He and [Superintendent Stan] Surratt both have been great mentors, and it’s humbling that they trust me in such an important position.”

“As a high school student I always thought I would be an accountant,” Chilek said. “Then when I entered college, I imagined myself being a coach for the rest of my life. I never thought I would ever be a principal, but this is where God led me, and I couldn’t be happier.”

Chilek has been a member of the Lindale community since he was in the sixth grade. He graduated from Lindale High School in 1997.

“I love this community, and I love that I get to raise my family in the same place I was raised,” Chilek said. “Being able to come back and be a leader here is awesome.”

He met his wife, Jennifer Chilek, who was a teacher at College Street Elementary (formerly Lindale Primary School) in 2003 while using the gym to hold baseball practice. They married later that year and together they have three daughters: Camden, Claire, and Carlyle.

“My daughter, Camden, is going to be entering high school as well,” Chilek said. “I’m not sure she’s too thrilled about me coming with her for another four years, but it’s exciting to experience this transition together.”

Outside of his career, Chilek enjoys spending time with his family. He also likes watching sports and playing golf.

“Golf is easily one of my favorite pastimes,” Chilek said. “Really anything that has to do with being outside is enjoyable to me.”