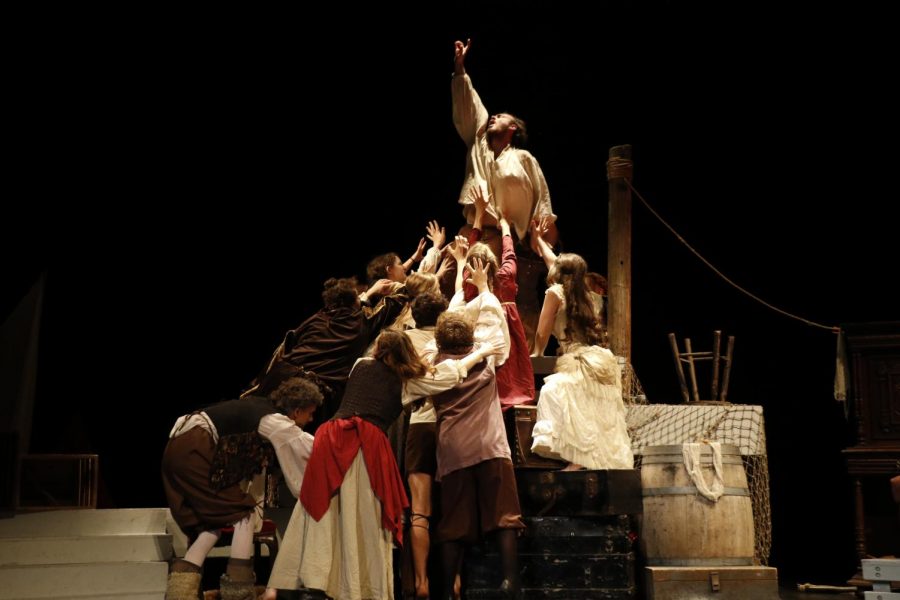 The theatre team performs their production of Mariner. This play is focused on Christopher Columbus, whoo is performed by senior Evan Howell.

He grins from ear to ear as he hears his name announced to the crowd. They erupt with the roar of hands clapping and the sounds of family and friends cheering him on. Not many have achieved what senior Evan Howell has. He has won best actor almost ten times in the past two years for his impressive performances in UIL One Act Play, and the entire company has made it to regionals or state in the last two years.

“The awards sort of come second to everything else,” Howell said. “There are many actors and actresses from across the state that come together for this event and it becomes more than the awards.”

In his freshman year of high school, Howell did not take acting as seriously as he does now. He was more interested in other events but slowly he acquired a love for theatre and the One Act program above all.

“My story is quite the opposite of most people,” Howell said. “Most people’s story would be hopes for broadway and all these Hollywood things, but that was never my thing when I joined.”

In Howell’s junior year he slowed participation in most other extra curricular activities. He has grown in theatre a tremendous amount since his freshman year, and his directors have noticed his developments.

“He started growing a lot in his acting skills during his junior year,” theatre director Taylor Jarman said. “We got to see a big growth in things that an actor is graded upon such as commanding the scene, the role and the show itself.”

His advancements have allowed him to be able to attend many conventions and camps. One of the most impressive locations to have been invited to attend was Talscamp, which is a two-week theatre training camp. Students from all around Texas go to strengthen their acting abilities.

“The camp consists of about one hundred people who have eaten, slept and breathed theater for most of their lives,” Howell said. “So meeting them was an incredible experience.”

Howell has been a lead in One Act UIL for every play since he entered high school. His most successful role was Levin in the production Anna Karenina his junior year.

“Levin was my favorite because of the time I got to spend with the character,” Howell said. “As well as the work and exploration it took to find that character.”

Through the years Howell has learned many things about playing different characters. He has grown in every aspect of playing a role in One Act.

“[He’s always been] amazingly talented,” theatre director Kari McKenzie said. “He really came into his own in last years production, Anna Karenina in which he was awarded best actor at every level of competition.”

“I have a very deep love [for theatre] and I will always have an appreciation for it,” Howell said. “I know I will never lose that feeling.”