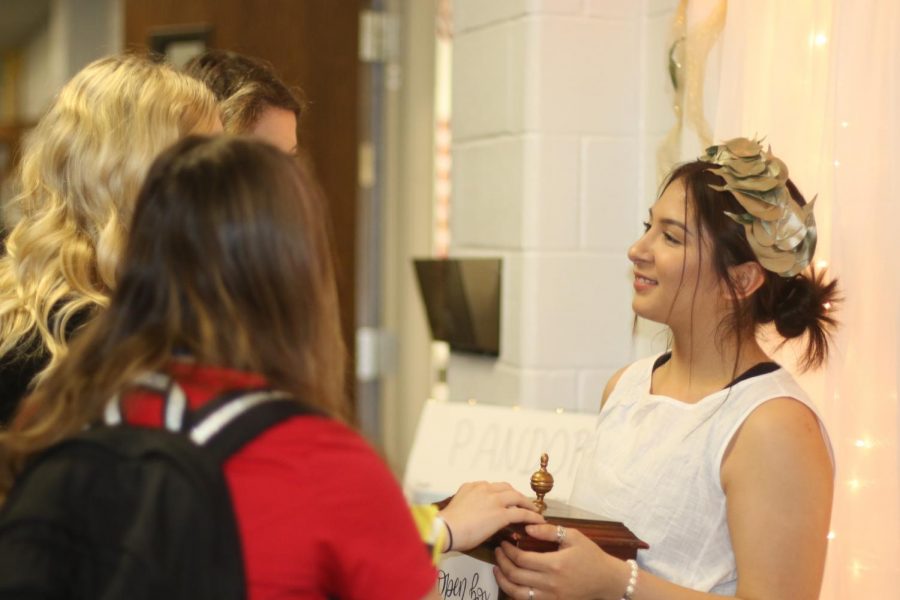 Junior Deborah Martinez talks to students about her character. She chose to portray the Greek historical figure, Pandora.

Students hosted a wax museum exhibit on March 20 in the hallways of the school. During the event, sophomore and junior English students in Penny Snow’s English classes dressed up as notable figures from history and interacted with other students.

“School can be so boring, my class included, especially when you are preparing for a major exam,” Snow said. “The more we can vary the approach, the better.”

The students were positioned during class changes at different parts of the school until the end of C lunch. The figures were frozen until another student approached them. The students provided information about themselves and answered any questions students had asked.

“I am excited to see how creative people get with this project,” sophomore Cameron Hilliard said. “It’s a great way to learn about people you don’t know or something unique about someone you are familiar with.”

This event is a contest between students in Snow’s class. Whoever portrays their figure with the best character in the sophomore and junior classes combined will win a free pass on the next essay assignment in the class.

“Acting these characters out will help us understand these figures motives behind great works they accomplished,” sophomore Alex Gaba said. “It should be an activity that everyone will enjoy, and it certainly different from any other project we have completed.”

The purpose of the project is to help students learn about important people who had a major influence on society. Students can use information from the activity to quote these figures on the STAAR and AP tests.

“This project envelops the obscurity of historical figures which is needed on the AP test,” junior Wesly Watkins said. “It should be a fun activity to learn some interesting facts about people we are familiar with.”

Students were instructed to pick from four categories on any STAAR or AP Language and Composition test.  They researched figures in each field of history, philosophy, business and science. With their information, they must write an essay, create ten questions for the students in the hall to ask, make a backdrop and dress the part.

“People are people,” Snow said. “Grit, gut determination and a willingness to fail separate them. Hopefully by impersonating an achiever, these attributes will spark a desire in all students to ‘become someone’ who willingly takes risks and learns from mistakes to grow.”