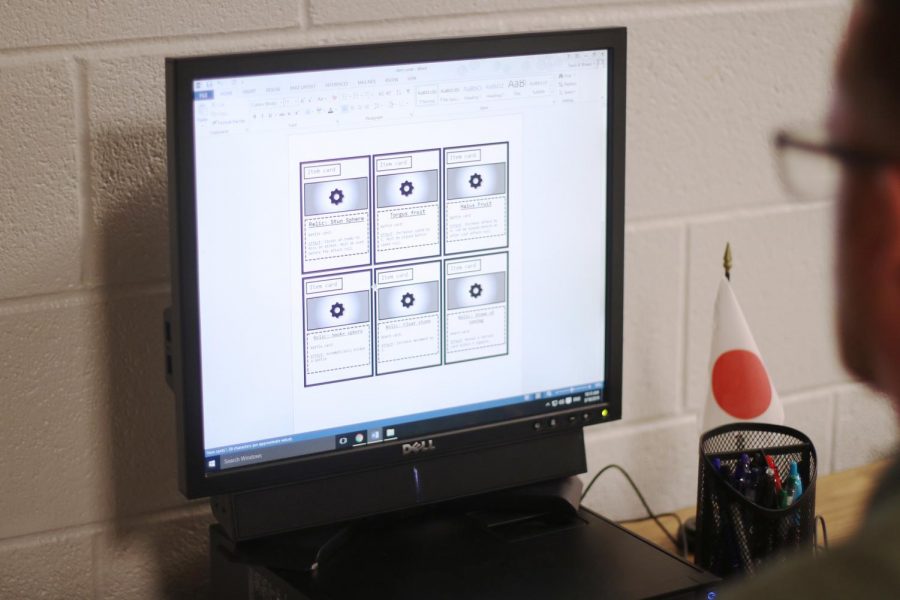 Brown works edits cards for the game. He has been creating these cards in Microsoft word.

His pen glides along the paper, his mind a swirl of ideas and creativity. He quickly jots down all the plans that he has. All of these thoughts go into a game Spanish teacher Travis Brown has been putting together for the past three years called “The Land of Snarf.”

Brown has played games his whole life and decided that he wanted to make one himself.

“I was mowing the lawn, and I had an idea for what I thought would be a cool video game,” Brown said. “I don’t have the knowledge or means to make a video game though, so I thought that I should make a board game.”

Brown had no previous experience with game design but that has not hindered his work. Most of his free time has been spent brainstorming ideas and playtesting for many years.

“It felt like something clicked,” Brown said. “It’s something I didn’t know I would end up loving, but I did.”

“The Land of Snarf” is a fantasy game that involves multiple players. The objective of the game is to collect as much treasure as you can while also fighting other players.

“It’s like a giant puzzle,” Brown said. “I’m creating the puzzle and simultaneously trying to solve it.”

Over the years of creating the game, only his close friends have played. He recently gave a copy of the game to junior Ian Buck Griggs , who will be playtesting the game.

“It’s interesting, and a cool concept,” Griggs said. “I’m excited to test it out.”

Brown has considered selling it even though it is mostly for fun. He has been researching what the process of selling the game would be like and if that would be something he would be willing to do

“I think everyone should do something of this sort,” Brown said. “Make a game, challenge yourself. It’s hard but it’s fun.”